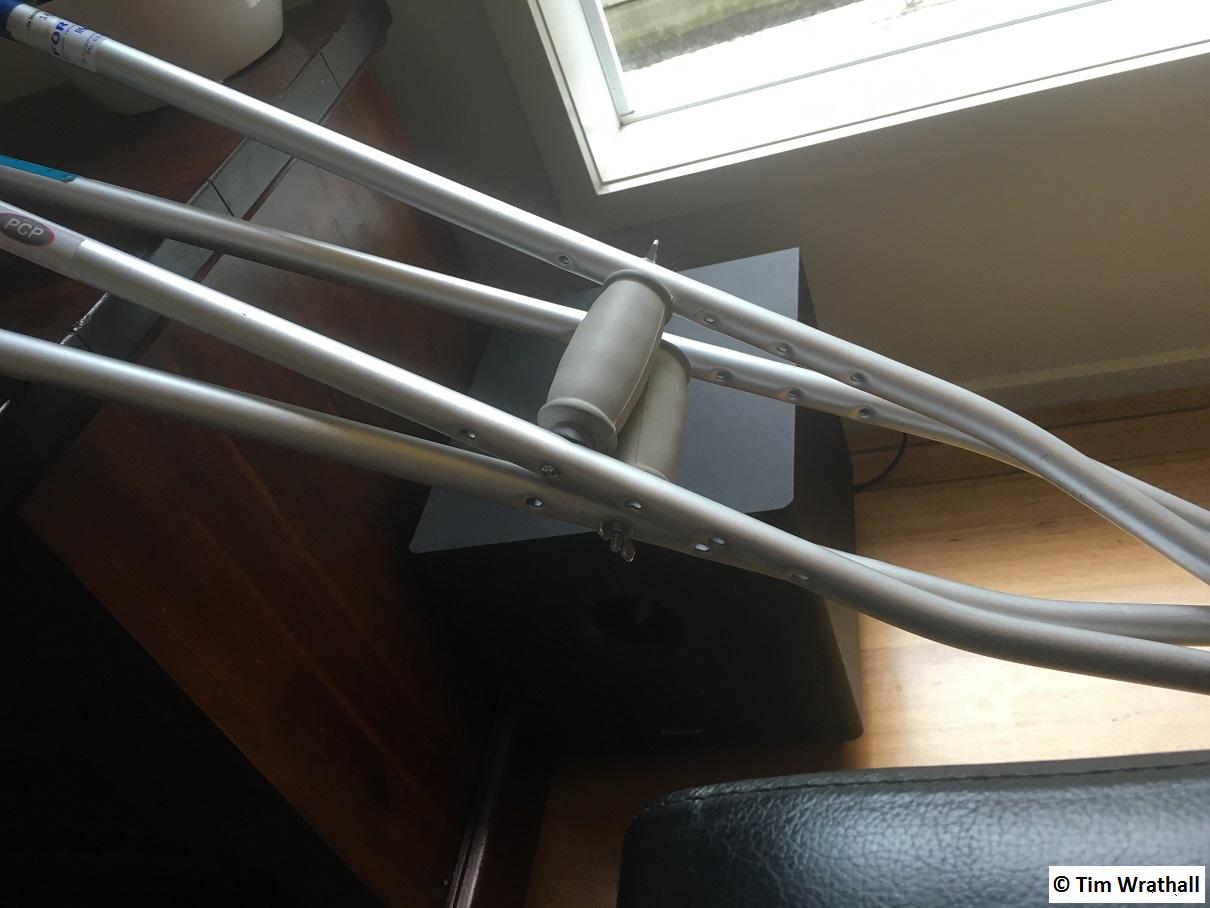 Well, that felt like a long four weeks with one working Leg.

As you might haver read, I had a small accident.  The net result; a busted Knee and a  Zimmer Brace for eight weeks.

For those who have lived with limited mobility, what I’m about to share will remind you of those times. I’ll try to limit the gruesome details, but there is no point in lying about it.  For people who go through this every day, I have a new found appreciation for the frustration you feel.

It was after my first day in Hospital, when I used a Bottle to Pee, that the reality of the next two months sunk in.  It would be s lot harder to do the things I take for granted. 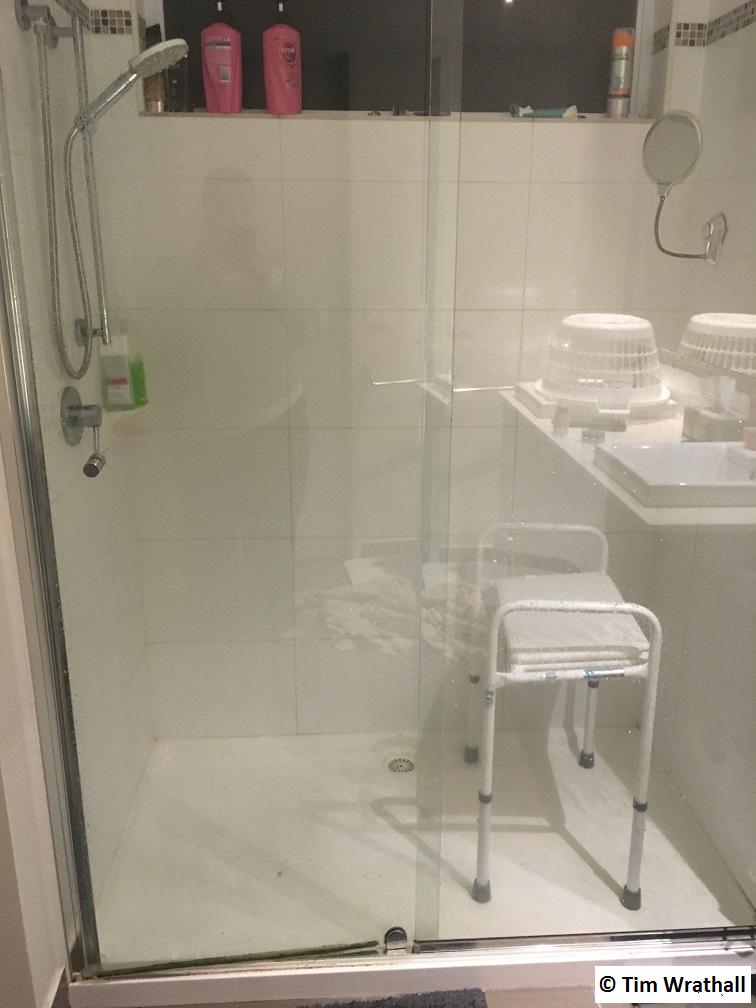 My Shower while I was in a Leg brace. The washing basket helped with leg elevation.

Take, for example, the Shower.  My little friend here is a shower seat.  In order to keep my Leg   immobilised, I need to sit down in the Shower.  With the aid of a foot rest.  I could take a Shower and feel a little human again.

The foot rest was a upturned washing basket.  Clever, eh?

In short, I had very limited mobility.  No walking.  No driving a Car.  Just, my Crutches. 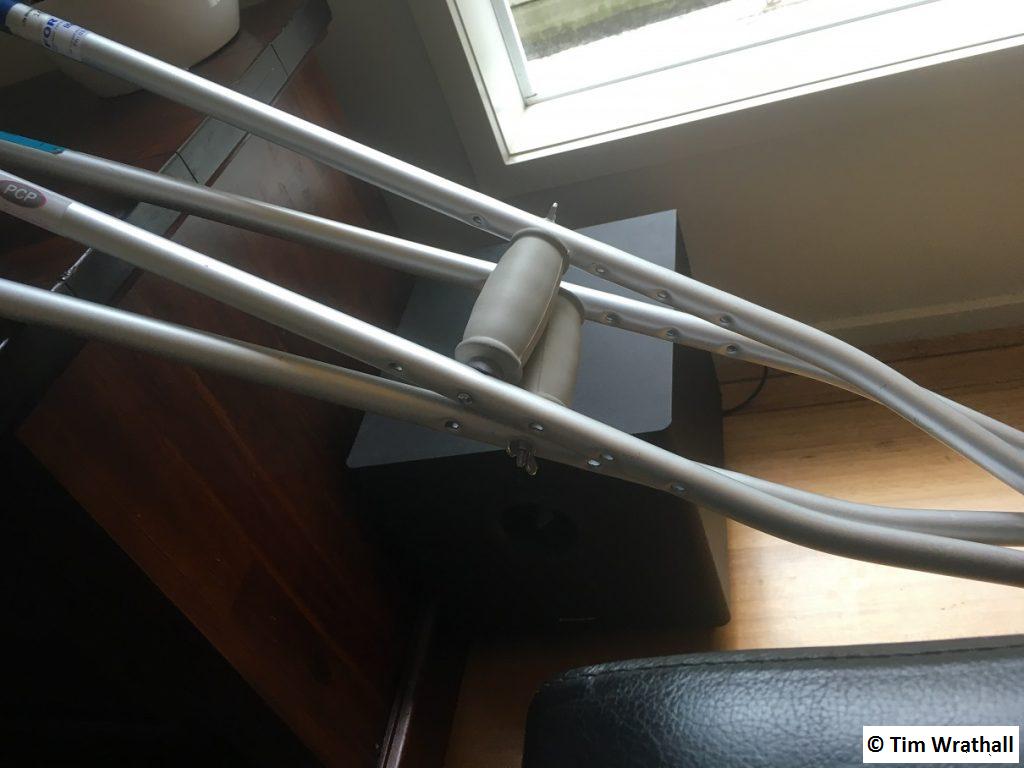 Say hello to my little friend.

There’s no way to sugar coat this; Crutches are just a pain in the arse, but a necessary evil.  They make a lot of noise, they dig into your ribs, and you’re typically exhausted after doing the smallest of tasks.

After a while, you can get fairly creative with limited mobility.  In four weeks, I’ve mastered the art of making a Sandwich and two-minute Noodles on one leg.  The real art is moving the Sandwich to the couch.  As you can see, I like to solve problems. 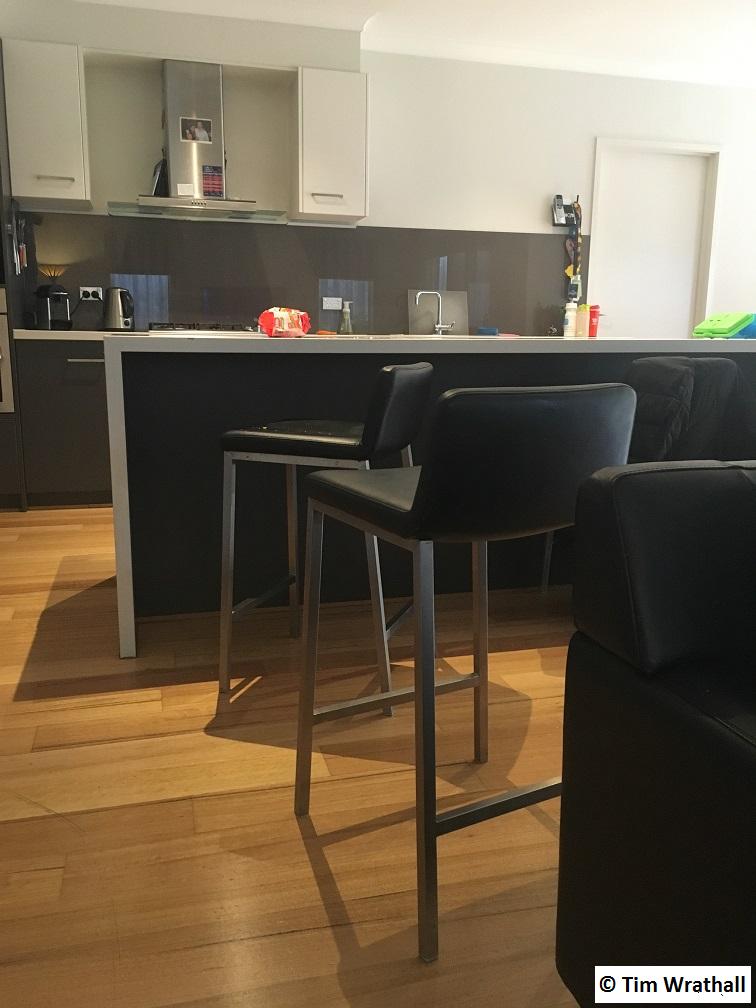 How to get your Lunch from the Bench to your Couch, on one Leg. 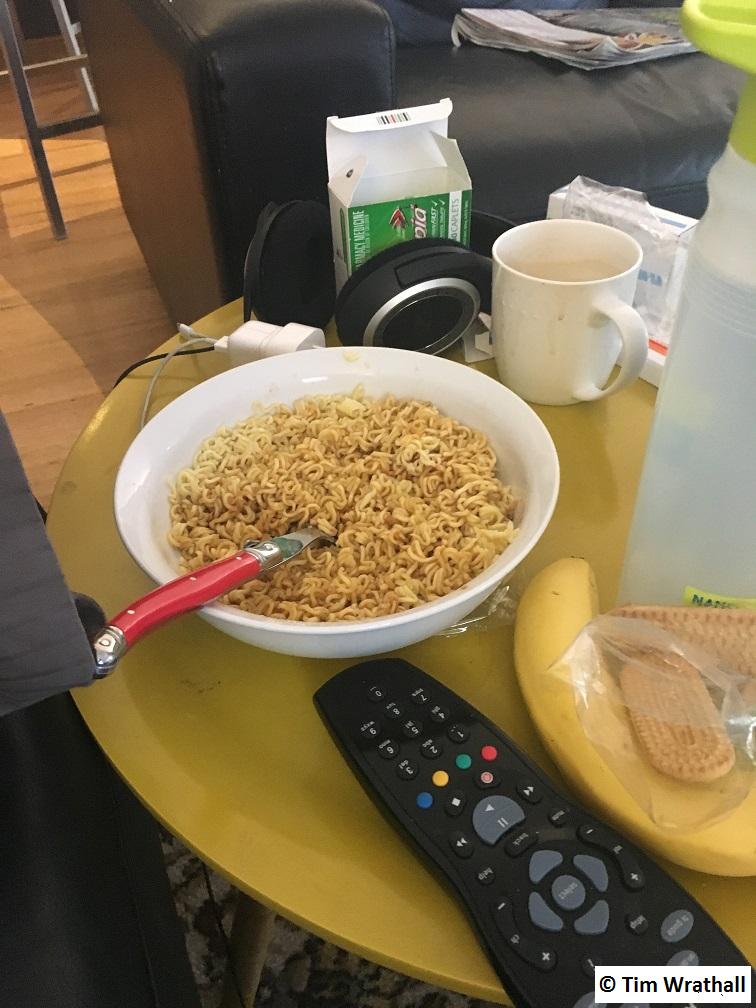 I don’t know where to begin here.

My Wife has been fantastic.  I could not, and would not, have survived the last month without her love and support.  She’s had the joy of caring for me like this; about seven years ago I ruptured my Achilles and lived on crutches for about twelve weeks.  However, back then she didn’t have the added bonus of three children.  This makes her effort even more of an achievement.

I won’t even try and pretend to understand what she’s gone through, I’ll stick with being grateful to her.  My gratitude will probably look like bloody awesome present in the future too…

My friends and extended family, just wow.  It’s amazing to see all the little things they are prepared to do; playdates, dinner, driving,  watch Rugby and anything else that has to be done.  I’ll be paying back favours fo a long time. 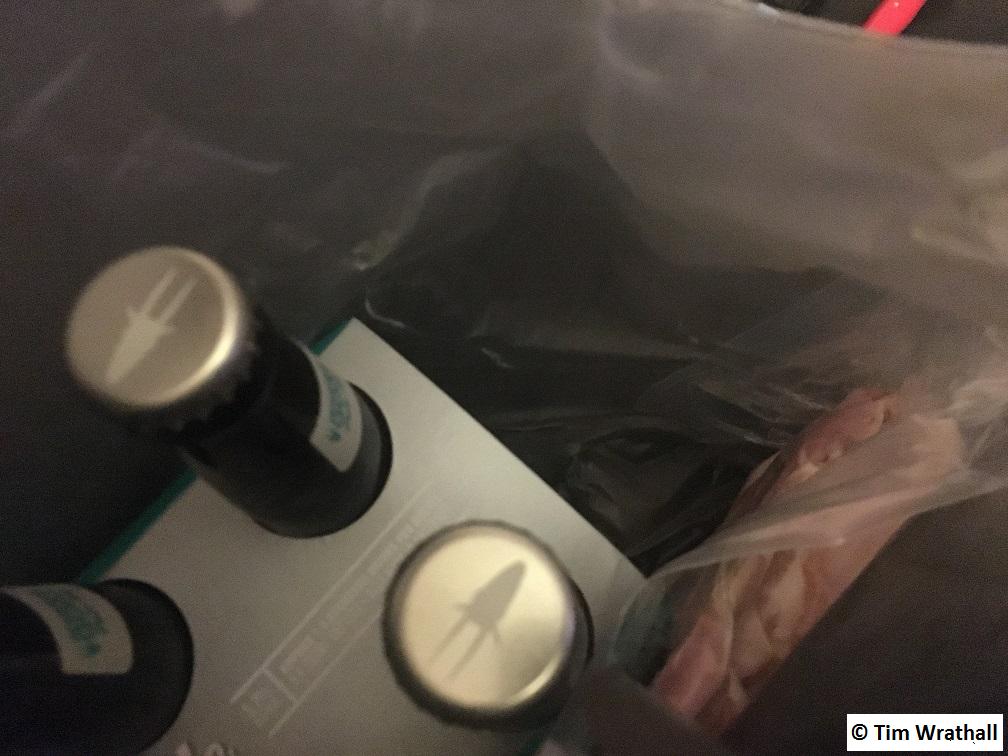 A Giftpack from one of my mates. Bless ’em..

I do like the gift packs my friends send over.  They will always be put to good use.

Not all smooth sailing 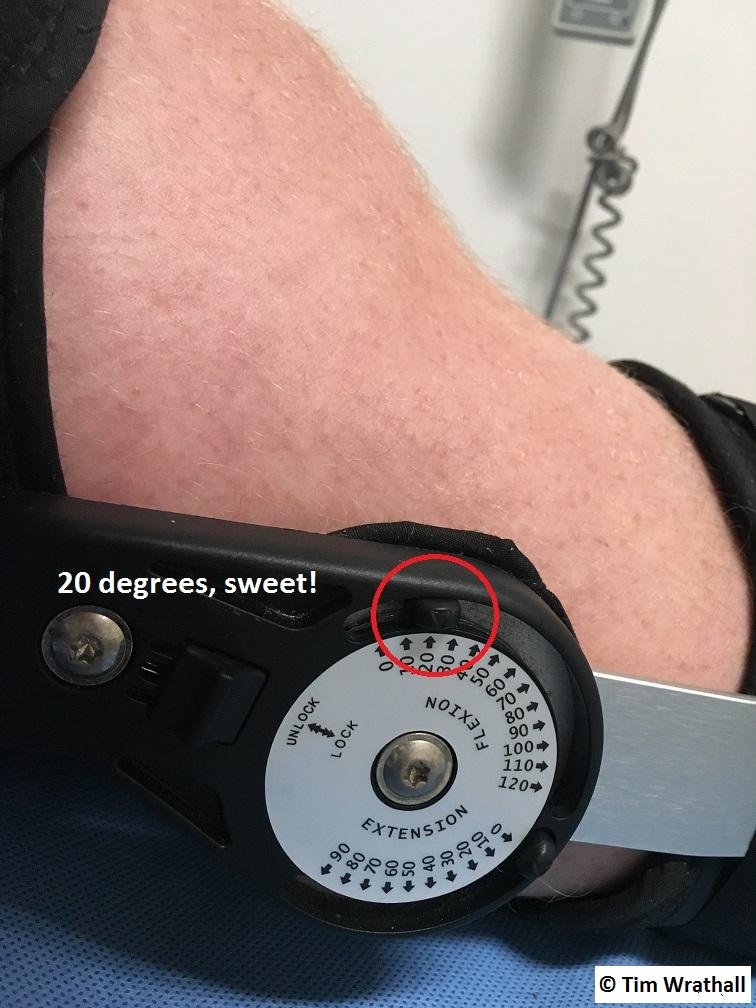 But, sometimes progress has  a price.

After a chat with the surgeon, he told me that I would be in the brace for a total of three months.

I had to ask him again, after all, he said at my last consult it would be two months in the brace.  He explained that my type of injury needs more care, or I risk more damage.  While I agree with his approach, nothing hides the disappointment of more time in the brace.

So, I survived the first five weeks.  So far, I’ve become a little more independent, and I even made it back to work.  Does it get easier? Well no.  But, I’m moving in the right direction.

In the next few weeks, I start Physio.  Can’t imagine it will be all sunshine  and lollypops, but again, progress.

Any, with all going well, I’ll be back on my feet in eight weeks.