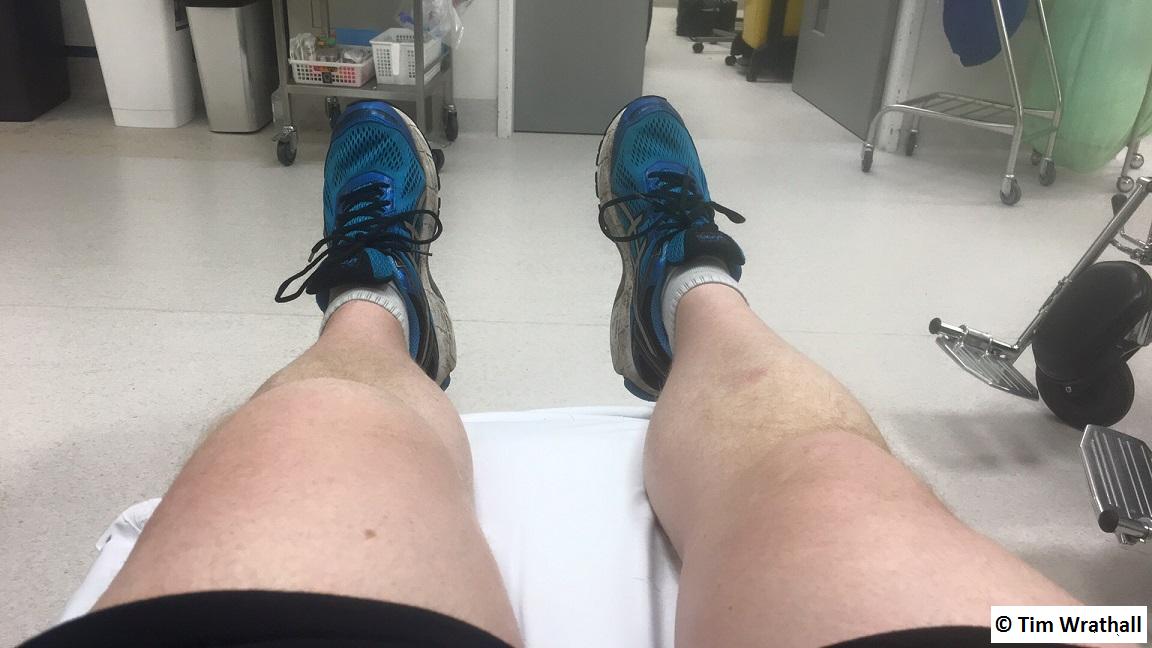 So, a few weeks back I had a bit of a Knee accident.  In my true “don’t do things by half measures” style, this one’s a doozy.  Right up there with my Achilles injury a few years ago.

Here’s the embarrassing part.  I wasn’t involved in some amazing feat; instead, I was at a local Rugby game, taking some photos, and watching my old team play.  I moved into a different spot to take some more photos.  It was on a Hill, and the ground was a little muddy, but I had the comfort of a fence to lean on.  I lined up my shot, snapped, and then my footing gave way.

Normally, when you slip on mud, the biggest problem is a little mud on your clothes.  For me, it felt like someone had slapped my thigh with an iron bar.  In a vain attempt at bravery, I tried to dismiss it as just a bad cork.  But, since I couldn’t put any weight on it, I knew deep down it was bad.

In hindsight, I must have fallen on a horrible angle, to do the damage it did.

Medically, I’ve ruptured the Quad Tendon in a way where it detached from my Patella (Knee Cap).  Here’s what it looked like before I went to Hospital, about an hour after I fell.  So much for a small cork, my looked like a grapefruit. 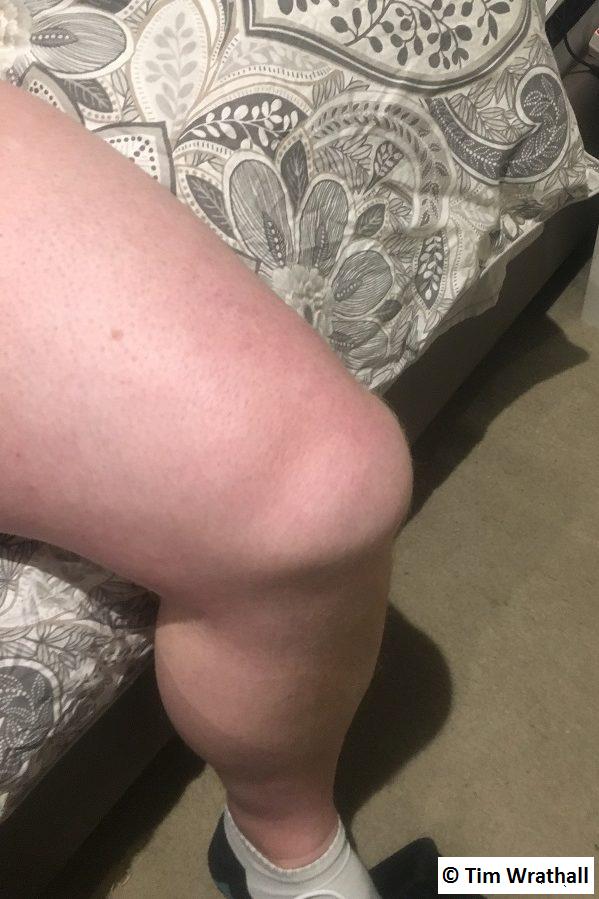 My damaged knee, one hour after it happened.

It only took a few minutes to decide, and I was off to the hospital.

After a few scans, and a consult with a specialist, the prognosis was not good.  One Doctor said he usually sees injuries like this in car crash victims.  Woah.

Here’s what my Knee looked like after five hours.  Fair to say, I had a big problem. 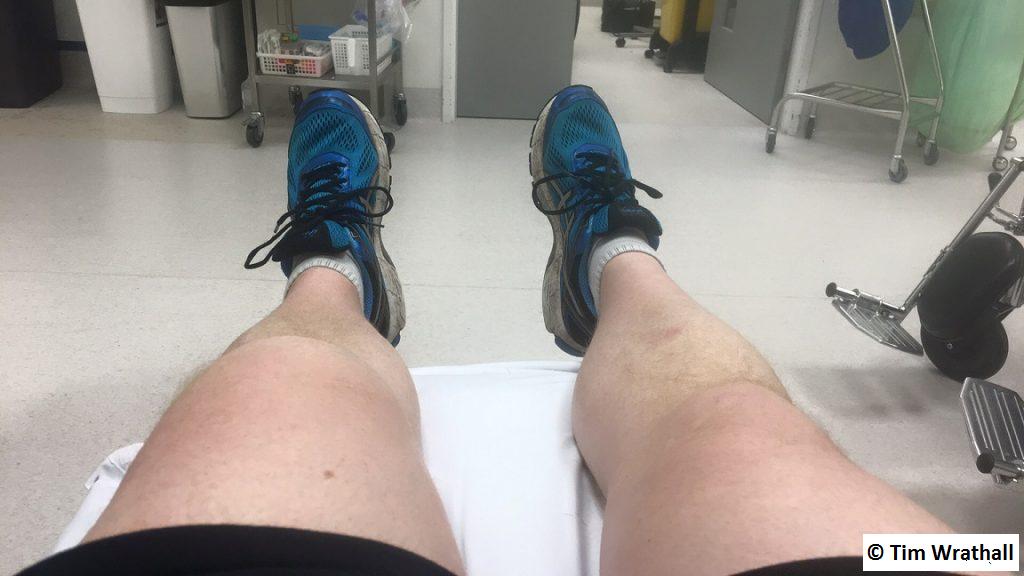 My Knee, five hours after I slipped. Notice the massive size difference.

The inevitable was just around the corner.

What does the Knee injury mean?

The first thing was to go under the knife.  The Surgeon booked me in for the next day, a lucky outcome considering I was in a public Hospital.  Then again. I couldn’t walk on it, so I needed the surgery.

A few hours later, here’s the result.  A fixed knee. 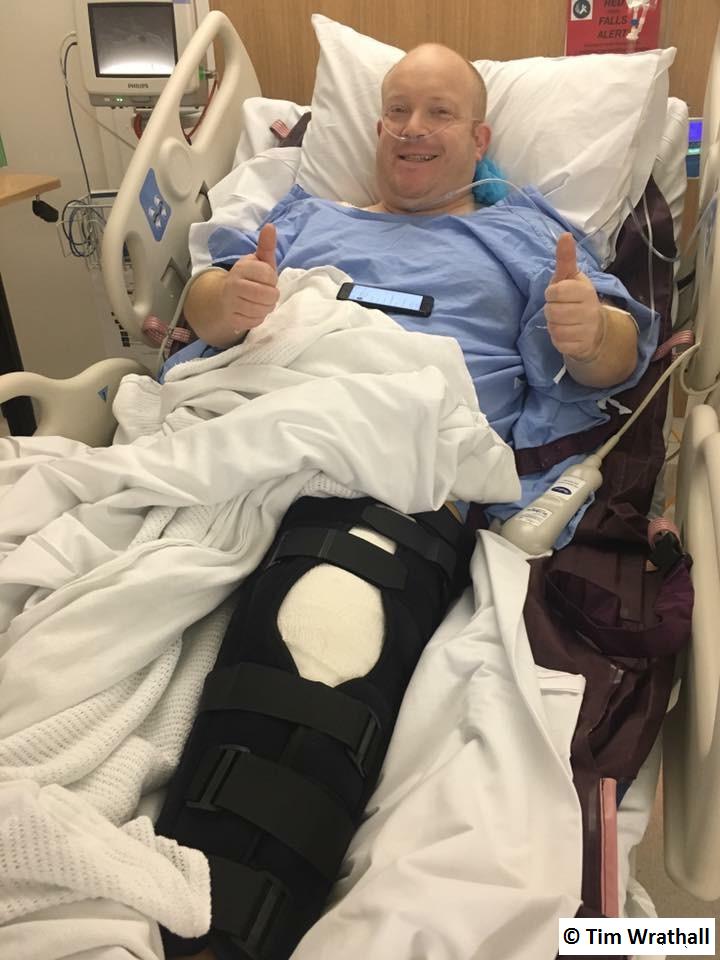 Me after my knee surgery. At Box Hill Hospital

But the worst news was to come.

For the next six to eight weeks, I was to wear a knee splint (Zimmer brace).  I could put no weight on it so that I would need crutches for that time crutches.  The Leg must be kept elevated where possible, and no driving at all.

Asa reminder, I have three young boys, a wife that works full-time, and a Job 30min away in a Car.

Over the next few weeks, I’ll keep you posted on how life has changed in the House.  Fair to say, things will be different for quite some time.